Search for a Keyword...

Home > Advice Hub > Life With My Pup > What Does a Stressed Dog Look Like? 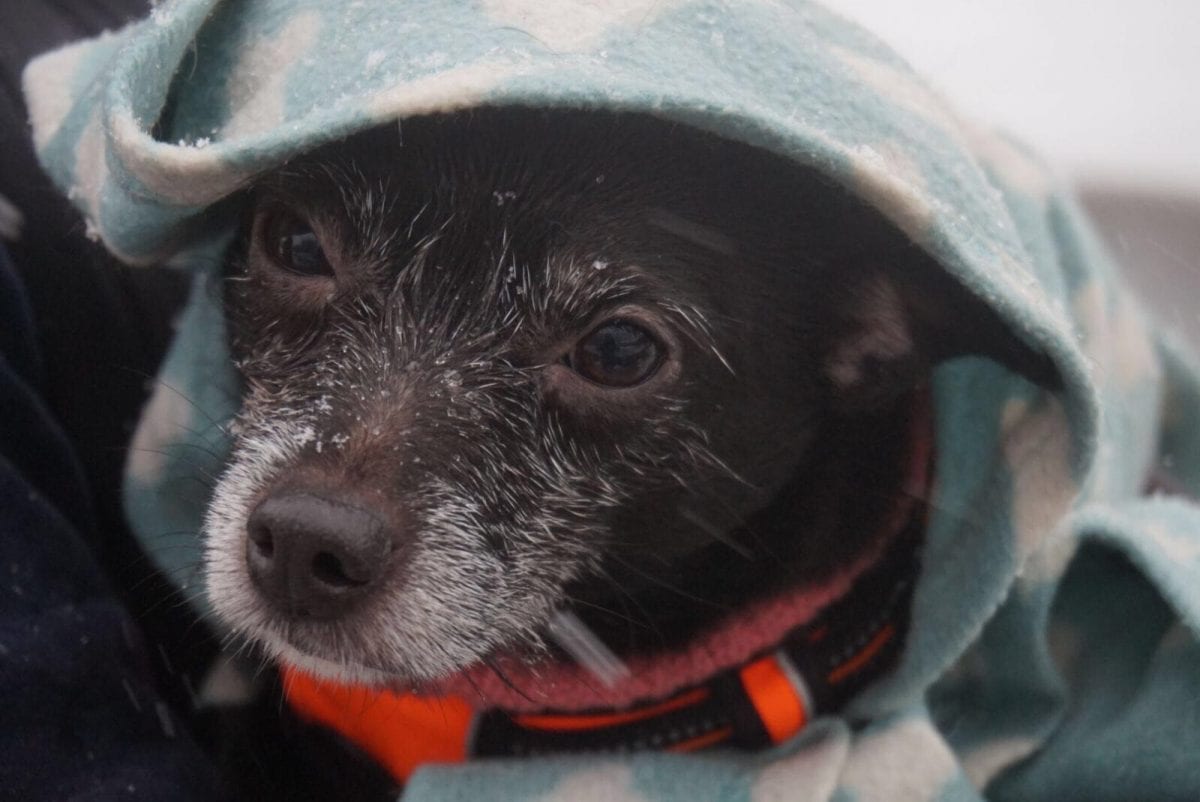 We all want to make sure our four-legged friends are as happy as can be, but how do you know when something is bothering them? Dogs can’t talk, but they certainly know how to express themselves. From the tips of their tails to their big wet noses, you can learn a lot about your dog’s anxiety and emotions just by watching their body language.

Our canine companions just want an easy life, but however hard you try, sometimes they will become stressed. Dogs can be overtired, frustrated, scared or confused – just like us. When a dog is stressed, they are much less likely to follow instructions, and some types of stress – such as fear – can cause dogs to act aggressively in order to scare off whatever is bothering them.

Some dogs take the world in their stride, whereas others can become alarmed at what seem to be the silliest of things. Common stressors include strangers, other dogs or animals, loud noises, cars or novel objects – this can be something as “un-scary” as a bin, a fallen tree or someone with a pushchair. Some dogs also try to appease their owners or other dogs that are stressing them out. They use their body language to try and show you that they don’t mean any harm; you’ll find out more about these ‘appeasement behaviours’ below, too.

By learning to recognise the signs, you can step in and save the day when your dog’s stress levels start to rise. Next time you take your pet for a walk, whack your phone in your pocket and watch closely for our nose-to-tail list of stress signs. Then, see if you can work out what’s causing them!

Sure-fire signs that your dog needs a breather

Whether they have little pointy ones or big floppy ones, a dog’s ears are a dead giveaway as to how they are feeling! Keep an eye out for ears that stand up to attention and point forwards, meaning that your pet has seen something that they want to know more about. It could be another dog, a rabbit or something a little frightening. If the ears are flattened right back along the neck, this can be a sign of fear, or even aggression. Some doggy’s try to use aggressive behaviour to scare away the things they don’t like, but deep down they are just scared themselves.

Did you know that panting, yawning and nose-licking are soothing to dogs? If your pooch is panting on a cool day when they haven’t been running around, or starts licking their own nose, you’ve guessed it – something isn’t quite right and they are trying to calm themselves down. Try to encourage these behaviours, as the ability to help themselves de-stress is a wonderful skill to have.

Chewing is a natural dog behaviour, especially in puppies. It releases soothing hormones called endorphins, which is why chewing can become out of control in situations where your dog is less than pleased. If your dog is a power-chewer, make sure they have plenty of safe chew toys that they can make use of, and spend a bit of time teaching them not to put anything except their toys in their mouth. When they pick up something that isn’t theirs, ask them to ‘drop it’ and then give them their favourite toy and praise them lots for using it.

The two most well-known signs that something is bothering your dog are whining and barking. Some dogs also turn their heads away to the side and ‘smile’, drawing their lips back, when they are confronted with something that makes them feel unsafe. If your dog is prone to vocalising their displeasure, you can try to minimise this by distracting their attention from barking to a preferred activity, such as sitting and looking at you (or, eventually, going to their bed or crate) and rewarding that behaviour – tricks are also a great form of distraction as they keep them occupied with learning and treats! Learn 5 super easy training tricks to teach your dog here.

Low growls are often a signal that there’s something they don’t like the look of, too. If your dog starts to show these signs, try to give him a little space from whatever the fuss is about and get him to focus on you.

Your four-legged friend uses his whole body to tell you what he thinks, but did you know that something as simple as shaking or scratching himself can be an indication that he is a little stressed out? These are more of those self-soothing behaviours, so encourage them and see if you can help your dog overcome whatever it is triggering them.

If the stress becomes too much for your dog to shake off himself, you will start to see other behaviours creep in. These can include standing tall and very stiff, staring intently at the trigger while he works out what it is and what to do about it. You might also notice your dog crouch, curl himself till he is almost in a sitting position, or flatten himself along the ground and crawl or back away from the trigger. These are quite strong behaviours, so help your doggy out and accompany them to somewhere a safe distance away if you’re out on a walk, or allow them to retreat to somewhere safe, such as a crate or the garden, if it happens at home.

Ah, the tail. That little flag that gives away so much of what your furry friend is thinking! But did you know, a wagging tail doesn’t always mean a happy dog? Some dogs wag their tails when they are worried that a confrontation might occur. They may also have their tail stuck straight up in the air or out behind them in this situation, too.

If they are scared, the tail will curl down between their legs, sometimes until it is flat against their tummy. If your dog’s tail does this, it’s time for you to step in and remind her that you’ve got her back.

These aren’t exactly a sign of stress, but they are behaviours your dog will do to try to ‘appease’ you if they believe you are less than happy with them. It’s super useful to recognise these as they can seem very annoying if you don’t understand them!

Picture this: you call your pooch over and they don’t come. You call again, and they walk towards you in a long, slow arc. It’s a simple miscommunication! You are saying “Come on, I want to get home”, but your dog hears “I’m not very happy about this!” in your tone of voice. Your doggy knows you’re a little unimpressed, so instead of running headfirst towards you – which isn’t very polite in dog body language – they will slow down and approach from a side angle to show that they mean nothing but friendliness. It seems frustrating at the time, but once you’re talking the same language – well, it’s quite sweet really.

Does that sound like a dog you know? Next time you want them to return, try to keep the stress out of your voice and let them know that you’re eager for them to return, instead of unhappy with their behaviour – it really works wonders.

Other appeasement behaviours include avoiding eye contact and those ridiculous, wide-eyed faces you see when you open the door and your favourite slipper is ripped to shreds. It’s not guilt you can see, but your dog responding to your body language by trying to show they don’t mean any harm to you. And let’s face it – sometimes those big, soulful puppy-dog eyes really do get them out of trouble.

Dogs also use appeasement behaviour to show each other that they are friendly and just want to play. If a dog approaches too quickly and seems a bit boisterous and bold, you may see your canine companion drop to the floor and show his tummy – a sign that they want to play, but gently, please!

What to do if your dog is showing signs of stress…

Out on a walk:

Take a little break away from whatever is worrying your furry friend and ask them to do some simple tricks. If your dog refuses to eat treats or follow simple instructions that he usually has a good grip of, it’s a good sign that he is a little stressed – sometimes called being ‘over threshold’.
Try to put the fear out of sight until they have recovered their usual abilities. Reward with treats and lots of praise and they’ll soon be on their merry way again.

Stress at home – who needs it? Home is your safe haven, so if your pooch is having a tough time there, it’s your job to help them overcome the challenges. Simple things like having a crate with soft blankets in where no one will disturb them can be an absolute game changer. If your dog has specific triggers, like fear of strangers, you may want to look at different types of training (counter conditioning, desensitisation, or just getting a good trainer in to show you what to do).

Here’s to a stress-free life

Owning a dog is a joyful experience, and you’ll both enjoy it more if you keep the dog stress levels low – and the fun levels high! Good luck spotting some of these dog anxiety signs in your furry friend and taking the right steps to help them overcome their stress.

5 Simple Tips for Training Your Dog

Taking Your Dog on Holiday

I belong to the Trade Sales Team

I belong to the National Accounts Team

I belong to the Business Transformation Team

I belong to the Credit Control Team

I belong to the Supply Team

I belong to the Finance Team

You can find out more about which cookies we are using or switch them off in settings.

This website uses cookies so that we can provide you with the best user experience possible. Cookie information is stored in your browser and performs functions such as recognising you when you return to our website and helping our team to understand which sections of the website you find most interesting and useful.

Strictly Necessary Cookie should be enabled at all times so that we can save your preferences for cookie settings.

If you disable this cookie, we will not be able to save your preferences. This means that every time you visit this website you will need to enable or disable cookies again.